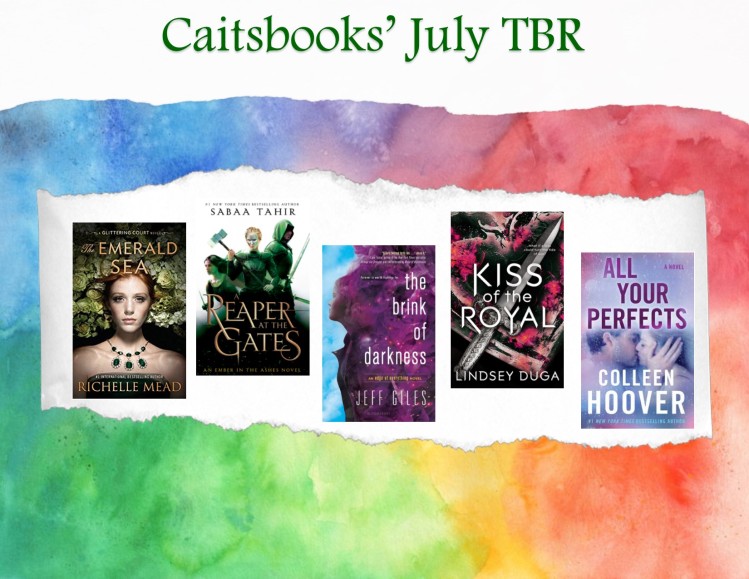 I got to 4/5 books from my June TBR! I consider that a success! Be sure to check out my June Wrap Up to see what I’ve read this past month!

I chose five more highly anticipated books to read this July, and let’s see if I’ll actually read all of them!

– The Emerald Sea by Richelle Mead
“Meet Tamsin, the Glittering Court’s hard-angled emerald. Her outsized aspirations make her a fierce competitor, rising to the top of the ranks. But when the ship she boards for the New World is tragically lost at sea, she is quite literally thrown off-course.” (Goodreads)

– A Reaper At The Gates by Sabaa Tahir
The third book in the An Ember in the Ashes series, the stakes have risen as the threat of war looms over the Empire.

– The Brink of Darkness by Jeff Giles
“In this sequel to the cinematic, romantic fantasy The Edge of Everything, star-crossed X and Zoe must overcome the boundaries of their two worlds in order to find their way back to each other.” (Amazon)

– Kiss of the Royal by Lindsey Duga
Princess Ivy has extremely powerful magic, but in order to harness it she is paired off with Prince Zach as her battle partner. Despite being matched in skill, they couldn’t be more different. Zach believes Ivy’s magic is dangerous but Ivy believes it is the only way for them to win the war against the forces of darkness.

– All Your Perfects by Colleen Hoover
“Quinn and Graham’s perfect love is threatened by their imperfect marriage. The memories, mistakes, and secrets that they have built up over the years are now tearing them apart. The one thing that could save them might also be the very thing that pushes their marriage beyond the point of repair.” (Amazon)

What are you most excited to read this month?