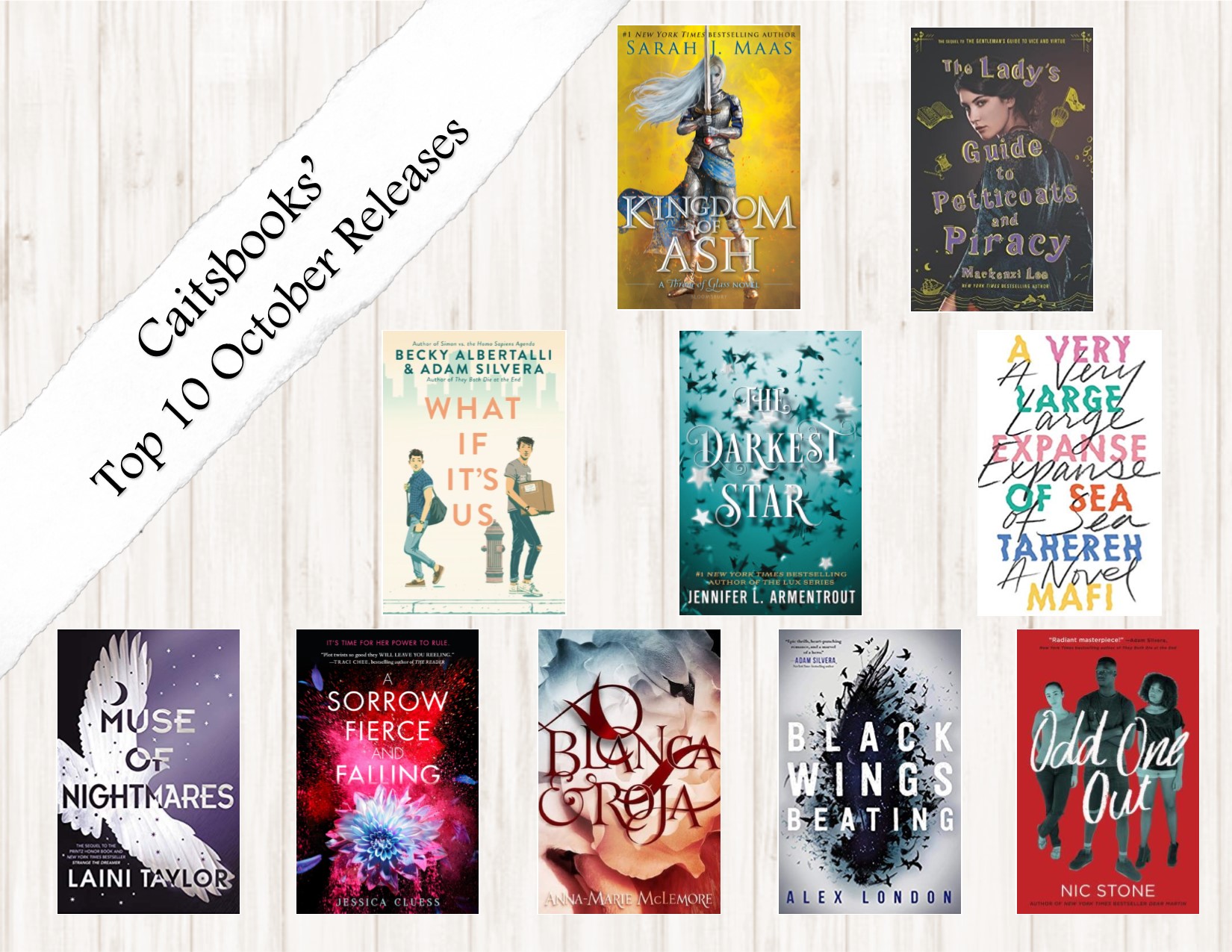 The best month of the year! October is swiftly approaching, meaning time for Halloween, costumes, pumpkins, and of course, amazing new book releases!

1. Muse of Nightmares – Laini Taylor
The sequel to Strange the Dreamer. “In the wake of tragedy, neither Lazlo nor Sarai are who they were before. One a god, the other a ghost, they struggle to grasp the new boundaries of their selves as dark-minded Minya holds them hostage, intent on vengeance against Weep.” (Goodreads).

2. The Ladies Guide to Petticoats & Piracy – Mackenzi Lee
A companion novel to the amazing The Gentleman’s Guide to Vice and Virtue. This book follows Monty’s sister Felicity, a year after the first book, as she sets her eyes on medical school.

3. What if It’s Us – Becky Albertalli & Adam Silvera
An LGBT YA contemporary romance by the king and queen of YA contemporary?! Arthur is a musical theater geek who is a romantic at heart. When he meets Ben at the post office, they must figure out what the universe has in store for them.

4. Blanca & Roja – Anna-Marie McLemore
“The del Cisne girls have never just been sisters; they’re also rivals, Blanca as obedient and graceful as Roja is vicious and manipulative. They know that, because of a generations-old spell, their family is bound to a bevy of swans deep in the woods. They know that, one day, the swans will pull them into a dangerous game that will leave one of them a girl, and trap the other in the body of a swan”(Goodreads).

5. Odd One Out – Nic Stone
Rae Evelyn Chin is the new girl in town, and is confused by her attraction to both Coop and Jupiter. Courtney “Coop” Cooper has been dumped again, and his best friend Jupiter is busy texting some girl. Jupiter is terrified of losing the girl she is falling for to her best friend because then she would lose him too.

6. Black Wings Beating – Alex London
Brysen wishes to be a great falconer, while his twin sister Kylee just wants to be free of it. “Together the twins must journey into the treacherous mountains to trap the Ghost Eagle, the greatest of the Uztari birds and a solitary killer. Brysen goes for the boy he loves and the glory he’s long craved, and Kylee to atone for her past and to protect her brother’s future. But both are hunted by those who seek one thing: power.” (Goodreads)

7. A Very Large Expanse Sea – Tahereh Mafi
“It’s 2002, a year after 9/11. It’s an extremely turbulent time politically, but especially so for someone like Shirin, a sixteen-year-old Muslim girl who’s tired of being stereotyped.”(Goodreads). I got my hands on an ARC of this back at BookExpo and it blew me away! I can’t wait for everyone else to read this fantastic and beautiful novel.

8. A Sorrow Fierce & Falling – Jessica Cluess
The third and final book in the Kingdom on Fire series, so I can’t say much about the plot here without major spoilers. However, if you’re looking for a historical fantasy full of magic and mystery, give this series a shot.

9. Kingdom of Ash – Sarah J. Maas
The final Throne of Glass book is here. There’s no way for me to vaguely explain the synopsis for this without spoiling the various plot twists and surprises that were introduced in each previous book. If you haven’t read this series, I highly recommend picking up the first book!

10. The Darkest Star – Jennifer L. Armentrout
A spin-off to the amazing Lux series, “When seventeen-year-old Evie Dasher is caught up in a raid at a notorious club known as one of the few places where humans and the surviving Luxen can mingle freely, she meets Luc, an unnaturally beautiful guy she initially assumes is a Luxen…but he is in fact something much more powerful. Her growing attraction for Luc will lead her deeper and deeper into a world she’d only heard about, a world where everything she thought she knew will be turned on its head…”(Goodreads).

And that ends my most anticipated October releases! Are you interested in any of these books? Are there any books that I didn’t include on the list?